Virtual Reality and Education. You’ve probably heard these two words combined before. But how is VR actually put to use in the classroom? And is this new medium really beneficial to learning?

It is hardly news that the way we teach our kids in schools is going through a digital revolution. What is new however, are the tools teachers now have access to, and how easy it can be to implement VR creation as a part of the class curriculum, in ways that support the study material being taught.

If you’re a teacher, should you follow the trend and look into getting a VR viewer for your classroom? Will this actually be useful to your teaching and helpful to your students? And if so, how can you get started easily and without the hassle of having to go through technical difficulties that will make you wish you had a PhD in computer engineering?

At CoSpaces EDU, we hear from many teachers who share the same questions and uncertainties as to how VR would actually fit within the curriculum and benefit students. Keep reading to discover how the new medium can help student learning by visualizing information and feeling more engaged.

Learning through a virtual experience

The concept to use VR as an educational tool has been gaining success amongst teachers and students, who apply the medium to a wide range of activities and in a variety of subjects. Many schools start with a simple cardboard viewer such as the Google cardboard, available for less than $10 and enough to play with simple VRs.

A recent study by Foundry10 analyzed how students perceived the usage of VR in their education and in what subjects they saw it being the most useful. According to the report, 44% of students were interested in using VR for science education, 38% for history education, 12% for English education, 3% for math education, and 3% for art education.

Among the many advantages brought by VR, the aspect that generally comes first when discussing the new technology is the immersion made possible by entering a 360° and 3-dimensional virtual space. This immersive aspect offers a different perception of the content being viewed, which enables new possibilities in education.

Schools today seem to be getting more and more concerned with making their students “future-ready.” By bringing the revolutionary medium of VR to the classroom and letting kids experiment with it, they help prepare them for the digital world in which they will grow and later start a career.

Last but not least, the new medium also adds a considerable amount of fun to the classroom as students get excited to receive the opportunity, sometimes for the first time, to put a headset viewer on and try VR.

VR also has the potential to stimulate enthusiasm within the classroom and increase students’ engagement. Several teachers have reported that they were impressed by the impact on students’ motivation and in some cases, even on their new perspective toward learning matter.

These teachers explained that when put in control of creating a piece of content and exposed to the fascinating new medium of VR, some of their students showed higher levels of participation and in some cases, even better retention of the information.

Using 3D creation tools allows going further than simply consuming VR, by letting students become the creators of their own virtual content. The new medium thus represents a complement to traditional teaching methods, immersing students in a world where they can create, consume, and connect with the curriculum on a completely new level.

Teachers can lead the class through activities like creating virtual exhibitions and animated dioramas of historic events, interpreting literature in visuals, representing abstract scientific concepts, or coding games to be later experienced and played in VR. Of course, all these activities can be adapted to match the class curriculum.

Brian Schumann, a Gifted Resource Teacher from Illinois who has been teaching for 20 years, uses VR as part of his lessons in English class. Brian says that using virtual reality can help inspire and engage students in class:

“The good old reality is no longer best practice in teaching. Worksheets and book reports do not foster imagination or inspire kids to connect with literature. I want my students to step inside the characters and the situations they face, I want them to visualize the setting and the elements of conflict in the story that lead to change.”

How to get started

Setting-up VR in the classroom is not as complicated as you would think. All you need to start is a smartphone with a VR app and any viewer headset, which can be as simple as a fold-out cardboard viewer like the Google Cardboard or any equivalent.

Both iOS and Android app stores offer a number of VR apps that are compatible with a Google Cardboard and which you can test.

When it comes to VR content creation, you can start by simply creating your own 360 images, a simple process that can be done from any smartphone.

But where the really fun part starts, is when you let your students create 3D animated content themselves and after that, view their creations in VR.

For this, you can use a 3D creation platform like CoSpaces EDU that will allow your students to build virtual environments in 3D and then convert them to a VR experience to be viewed with a headset.

Now that you have all the tools you need, you’re off to bring your students on new, virtual reality adventures. Bon voyage! 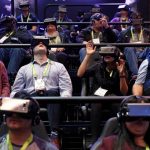 The future of education is virtualUncategorized 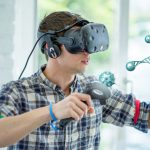 How Virtual Reality Will ChangeUncategorized